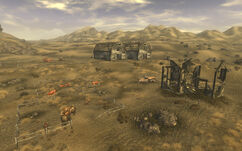 Play sound
Metallic_Monks.ogg
“The animals, they are evil. They tried to eat me in my sleep. They want the farm for themselves. Now that Mom and Dad are gone they want the farm for themselves. They are plotting against me, plotting to eat me. They are becoming ghouls like my parents and they want to eat me like my parents did. Too many of them to kill them all. I know what I'll do, I'll burn the house down around me, then the animals can't eat me because there will be nothing left for them to eat!”— Torn diary#4

Matthews Animal Husbandry Farm is a location in the Mojave Wasteland in 2281. Located equidistant from the raided farmstead to the north and the crashed vertibird to the south.

Four scattered diary pages detail the grisly end of the last human inhabitant of the farm, a lone child. According to the diary pages, the child's parents went to Camp Searchlight to procure supplies. Days passed and the parents did not return. The child went into the camp to search for them and found they had become feral ghouls. This was due to the Legion's sabotage of the NCR's camp via the unleashing of stored radioactive waste. The child's parents, now feral, attacked on sight, so the child shot them in self-defense and returned to the farm.

Alone and traumatized, the child became increasingly paranoid, accusing the farm animals of a violent conspiracy to overtake the farm. In a last, maniacal attempt to stop the animals, the child burned the farmhouse to the ground while still inside. The skeletal remains can be seen found within the farmhouse ruins.

There are two dilapidated barns sitting adjacent to one another, one containing malnourished bighorners and the other malnourished brahmin. Both barn entryways face east. Across from the barns is the ruins of the farmhouse. Inside is the child-sized skeleton of the previous owner.

The graves, presumably of the parents of the child

Both sheds seen from the air

Burned down farmhouse, the skeleton of the child next to diary page 4. Page 2 in the back of the nearby truck

Two of the fences containing cattle

The shed with the brahmin and her two calves.

The shed with the bighorner and her two calves
Add a photo to this gallery
Retrieved from "https://fallout.fandom.com/wiki/Matthews_Animal_Husbandry_Farm?oldid=3470603"
Community content is available under CC-BY-SA unless otherwise noted.