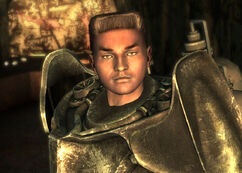 He was assigned to an outpost on the outskirts of Old Olney. He made an Enclave field report describing how he found an apparently passive feral ghoul.[1] He seems to be standing guard at the truck at an Enclave camp southwest of Vault 92.

Once spotted, like all Enclave forces, he will attack the Lone Wanderer with his flamer.

Matthew Scott appears only in Fallout 3.

Retrieved from "https://fallout.fandom.com/wiki/Matthew_Scott?oldid=3187465"
Community content is available under CC-BY-SA unless otherwise noted.