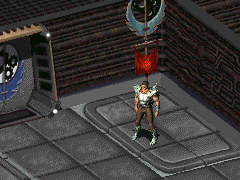 Get the vertibird plans for the Brotherhood of Steel

“The Brotherhood of Steel is not the power that we once were. We believed ourselves to be the sole source of technology left to mankind. Secure in this belief we have let our order decline over the years.”

Upon first meeting Matthew, he explains that the Brotherhood has reactivated their outposts in the Den, the NCR and San Francisco in order to gather information on the Enclave. He tells the Chosen One that the Enclave has obtained Vertibird technology, and without their own Vertibirds, the Brotherhood would be unable to stop an invasion by the Enclave. He then tasks the Chosen One with infiltrating their main refueling base, Navarro, and stealing the plans.

If the Chosen One completes the task, Matt is killed by the Enclave's own Frank Horrigan two days later. In a video recording of his assassination, he tells Horrigan that he and President Dick Richardson will never succeed, and that the Chosen One will end their reign of terror. Frank dismisses this as a pathetic prophecy, and although Matt attempts to resist, Frank kills him.

* Only in cinematic with Frank Horrigan.

Matt appears only in Fallout 2.

Matthew, before he is slain by Frank Horrigan
Add an image to this gallery
Retrieved from "https://fallout.fandom.com/wiki/Matthew_(Fallout_2)?oldid=3073170"
Community content is available under CC-BY-SA unless otherwise noted.