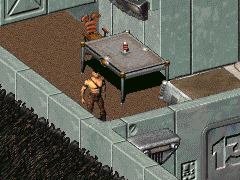 “They are fast, tough, perceptive, and deadly. If their numbers grow large enough, they will be the greatest threat that the human race could ever face. Think about it. They need to be eliminated!”— Matt

Matt is a captive of the intelligent deathclaws in Vault 13 in 2241.

Matt tries to convince the Chosen One to help him escape the vault.

Matt appears only in Fallout 2.

After agreeing to help Matt escape the vault, you will be at the first floor. The deathclaws there will start attacking him but not you nor anyone in your party unless you attack them first. If Matt is killed and you haven't attacked any of the Deathclaws you are free to leave the screen. But, returning or saving and loading a game in the Vault will crash the game. [verified]

Retrieved from "https://fallout.fandom.com/wiki/Matt_(Vault_13)?oldid=3073169"
Community content is available under CC-BY-SA unless otherwise noted.