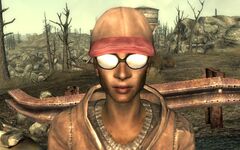 Matilda as she appears in the Prima Guide

“The family must have gotten to them in the last attack! Sons of bitches!”— Evan King upon hearing of the West's deaths.

Matilda West was an inhabitant of Arefu in 2277.

On closer inspection, it seems Matilda West has been slain using the same odd techniques as those employed on her husband. The Wests were settlers in Arefu for over ten years, and no one in the settlement appears to hold a grudge against them. Indeed, Matilda was responsible for clearing out the village outhouse, a task now sadly fallen to Ken Ewers.[1]

Matilda West is the wife of Davis West and mother of Ian and Lucy West.

Blood Ties: Matilda is found dead when the Lone Wanderer searches the Wests' house. Her or her husband's body can be examined to find out the cause of their deaths. With a Medicine skill of 30 and above, it is revealed they were bitten on the neck, and that the bite goes all the way to the bone. Later on, it becomes clear Ian was the one who killed both his parents.

Matilda West appears only in Fallout 3.