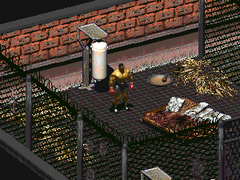 Mike in his cage in the basement

Mike "The Masticator" is a heavyweight boxing champion in 2241.

He can be found in New Reno, training at the Jungle Gym, although he actually lives in the basement of the Bishop family's casino, the Shark Club. He is a towering mass of muscle, with each arm looking like it could double as a tank barrel,[1] complimenting his face, which looks akin to a raw slab of meat. He is mentally underdeveloped, kept in a cage in the casino basement, where his aggression and relentlessness are fine-tuned and maintained.

Of all the New Reno boxing favorites, hopefuls and wannabes, Mike "The Masticator" stood unopposed at the top of the heap. His championship came from two sources. In the first place, Mike is an outstanding fighter, boasting strong skills in unarmed combat. However, Mike also owes his standing to fear. Many boxers are afraid to challenge the champ.

Mike earned his nickname of "masticator" through his very unusual tendency to bite at opponents' ears. Many a challenger has found out the hard way that Mike does not believe in clean fighting. Losing a fight to Mike "The Masticator" usually means losing an ear, as well. In fact, if the Chosen One loses their fight against Mike, they stand almost a certain chance to receive that ear. However if the Chosen One is skilled enough, (160% Unarmed required), then they can tear off his ear in turn.

Mike "The Masticator" appears only in Fallout 2.

Mike "The Masticator" is a reference to boxer Mike Tyson. His fight with Evan Holyfeld, based on Evander Holyfield, in which Evan loses his ear, is a nod towards the infamous fight between Tyson and Holyfield where Tyson bit off a chunk of Holyfield's ear. This is also referenced in Mike's message file, which is named "NcTyson.msg."