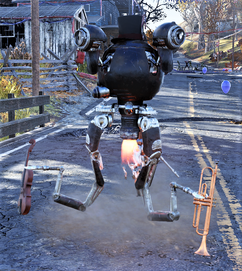 The Master of Ceremonies is a Mister Handy operating in Helvetia in 2102.

Master of Ceremonies is a Mister Handy which was reprogrammed to spice up Fasnacht Day celebrations in Helvetia.[1][2] It conducts all festivities related to Fasnacht Day in the town, including leading the parade and seeking help from passersby to ensure that the festival goes off without a hitch. It sports a black chassis and wears a black top hat embellished with a red ribbon. It also holds a violin, trumpet, and flute in its claws.

When it is not leading the parade, it can be found on the bridge between the Helvetia post office and Freyja's Haus Restaurant. During the parade, it plays a 15-second loop of One More Pils. To alert players of an incoming assault, the festive music garbles and slows down. During the combat phase, the loop is played at a faster tempo than during the march. Once the combat ends, the same garbled music is played to denote the parade moving again.

The Master of Ceremonies has a unique phrase depending on which Fasnacht mask the player character is wearing when speaking to him.

The Master of Ceremonies appears only in Fallout 76, introduced in the Wild Appalachia update.

On occasion, the Master of Ceremonies will remark that he has a very reliable Swiss watch. This is likely a reference to the Swiss watch company Rolex.

Retrieved from "https://fallout.fandom.com/wiki/Master_of_Ceremonies?oldid=3482035"
Community content is available under CC-BY-SA unless otherwise noted.