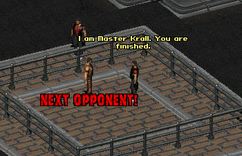 “I am Master Krall. You are finished.”

Master Krall is a martial artist in Chinatown in 2241.

Lo Pan wants the Chosen One to prove themself against his students, before being able to enter martial combat with the Dragon's arch enemy, The Dragon. Six of his followers have to be defeated. Master Krall is the fifth one, following Smitty.

As the fighter's strength in combat increases, so does their arsenal. Starting with Smitty, Master Krall can also kick.

Master Krall appears only in Fallout 2.

Retrieved from "https://fallout.fandom.com/wiki/Master_Krall?oldid=3073164"
Community content is available under CC-BY-SA unless otherwise noted.