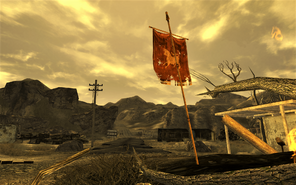 The massacre of Nipton or the Nipton lottery was the methodical killing of Nipton inhabitants by Caesar's Legion operatives in 2281.[1][2][Non-game 1]

Hoping to capitalize off the local prison break, Mayor Joseph Steyn invited members of the newly formed Powder Gangers to the town to service them with prostitutes, chems and other entertainment.[3] Simultaneously, the mayor extended news of these offerings to NCR troops, who began to occasionally visit the town as well. He kept the peace by having the gang visit during the day, and the troopers at night.[3]

Steyn was subsequently approached by Vulpes Inculta, the highest ranking frumentarius of Caesar's Legion, under the alias of Mr. Fox, with a proposition. Vulpes offered 8,000 caps in exchange for the mayor facilitating the arrival of both groups at the same time, allowing the Legion to make an example of them.[4] Steyn agreed without hesitation and began making plans to abandon the town with his newfound riches.[4][Non-game 2]

When both groups arrived, the Legion sprung their trap and dragged everyone to the center of town, including the mayor and residents.[5] Vulpes announced that due to their profligacy, the inhabitants and guests would be forced to participate in a lottery to determine their fates.[6] Vulpes ordered the systematic murder of each person based on their tickets, starting with decapitations, crucifixions, and enslavement.[7]

Vulpes tells the Courier that the citizens here were hardly innocent, as they stood by and watched silently as their family members and friends were killed, without resisting, caring only for themselves.[8] When the mayor's ticket was drawn, he was given unique treatment and was burned alive on a pile of tires.[9]

With the murders complete, and first, second, and third-place tickets were drawn. Third place winners were enslaved and taken by the Legion to a local raid camp. Boxcars, the second-place winner, was spared but the Legion crippled his legs.[10] Lastly, the first place winner, Oliver Swanick, was spared and freed.[7]

The Legion set fires in the town, the contents of which causes black smoke to rise, visible for miles. At the Mojave Outpost, an NCR ranger named Ghost will share their concern with seeing the smoke, coupled with a recent lack of traffic from the town, and asks the Courier to investigate.[11]

Upon approaching the razed settlement, they will encounter the winner, Oliver Swanick, who will share information about the events that transpired. Boxcars is located in the general store and will likewise share their recollection of the events. The remains of citizens, guests, legionaries, and mongrels are found throughout the area, in houses, in the trailer park, within the town hall, and inside the hotel. Two rows of victims are crucified along the main road. Although alive, they cannot be saved, and must be mercy killed or left behind.

The Courier can engage with the contingent of Caesar's Legion in front of the town hall, who are preparing to return back to their base at Fortification Hill. The leader of will approach them and assure them that they are in no danger. The Courier can inquire into the events that took place here. After a brief exchange, the frumentarii leader may ask that they spread the word of this atrocity throughout the wasteland, especially to any members of the NCR they come across.[12] The Courier can choose to do so, by heading back to the outpost and speaking with Sergeant Kilborn and Ranger Ghost.

The massacre of Nipton occurs in Fallout: New Vegas.