Fallout 4
“The “new” state house was completed in 1798 to house the government of the state of Massachusetts.”— Boston landmark inscriptions

The Massachusetts State House is a location in the Boston Common neighborhood of Boston in 2287.

The "New" State House was completed in 1798 to house the state government, replacing the Old State House in this role, until the formation of the Thirteen Commonwealths in 1969.[1][Non-canon 1]

Outside the building is a pre-War plaque and a Freedom Trail marker. The location is the second stop on the Freedom Trail, with the code "4:L." A Novice-locked safe is in the small ruined eastern wing.

Inside, the entrance area is a destroyed facility full of mirelurks and mirelurk hatchlings, along with dead raiders. The only available route is up a ramp formed by the collapsed ceiling to the east, which leads through a series of derelict rooms on the second floor, one of which has a terminal previously used by the Treasurer and a cooking station. A pair of short stairways to the south descend to a room with two lion statues. Proceeding west then south through more rubble-filled rooms leads to a collapsed ceiling ramp heading back up to the second floor. The path east once again returns to the first floor down a ramp, with the building's central large atrium to the west.

In the middle of the atrium is a hole leading down into the partially flooded basement area. By falling through the hole, one will enter a large chamber with a pair of closed security doors to the south and a hallway to the west. The hallway leads to a large storage room full of shelving and radioactive barrels, followed by a room with broken pipes, and finally a room with a terminal and a generator. One can open the security doors across the large chamber to the south via the terminal. Returning to the central chamber will result in a mirelurk queen emerging from the pool of water.

Through the southern doors is a room full of radiation followed by a hallway. To the west is a room with a bottlecap mine and a terminal previously used by a maintenance technician, while to the east is a room with three frag mines and an Expert-locked safe. A unique mirelurk encounter triggers in the hallway, with the mirelurk tunneling up through the floorboards until finally emerging at the western end of the corridor. Past the room with the frag mines and safe is a trapped corridor and a ramp leading up into the raider base. The base spans the first, second, and third floors, with a weapons workbench on the second floor, and an armor workbench, two bottlecap mines, and the raider leader on the third floor.

On the third floor, through the Master-locked door is a room containing one or more raiders, as well as a sniper rifle and some ammo. The hole in the wall leads to a wooden walkway above the atrium. Across the walkway to the north and through a series of rooms is a final room with the raider leader, another raider, a turret, an attack dog, and a steamer trunk. To the west is an elevator that heads back down to the second floor in the entrance area.

The building also features a hidden room with a skeleton surrounded by three teddy bears and a dose of Psycho. To access the room, one must have a jet pack. The room is to the east, through a hole in the ceiling above the ramp on the second floor descending to the first floor and the atrium. Approaching the skeleton will trigger a chilling piano note.

Without a jet pack, once the player character jumps down the large hole in the atrium to the flooded chamber, they will be forced to advance through the mirelurk-infested basement and upward through the subsequent raider base in order to be able to exit the building.

The Massachusetts State House appears only in Fallout 4.

Raider leader's base on third floor 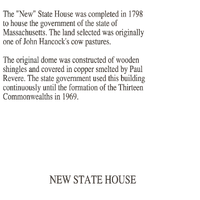