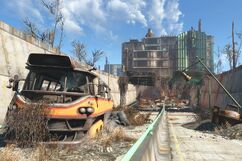 Mass Pike Tunnel west is the westbound section of the highway connecting to the Mass Pike Interchange. Numerous ruined vehicles lay on the highway. The highway that leads to the interchange is destroyed making access impossible unless using power armor with a jet pack.

A group of raiders have built an encampment near the entrance, allowing access from the upper roadway down. It is here where the Sole Survivor uses Dogmeat to track Kellogg. A bloodied rag lays nears the stair access on the other side of the highway.

The Mass Pike Tunnel west appears only in Fallout 4.

The two Nuka Quantums
Add a photo to this gallery
Retrieved from "https://fallout.fandom.com/wiki/Mass_Pike_Tunnel_west?oldid=3284026"
Community content is available under CC-BY-SA unless otherwise noted.