The Mass Pike Interchange is a location in the Commonwealth in 2287.

Part of the Massachusetts Turnpike before the Great War, the interchange between two elevated freeways served travelers heading north-south and east-west. The intersection is situated near Lake Cochituate, west of Boston. By 2287, Mass Pike Interchange has become inhabited by the Gunners, who have established an outpost on the freeway's ruins.[1]

Sitting atop the western freeway, it consists of two roads: the freeway and the old highway. The old highway connects Mass Pike Tunnel west to the interchange and leads to the Nuka-World transit center at the west end of the highway. At the bottom and top of the freeway, the Sole Survivor will come across several Gunners. There are two elevators that can be used to reach the upper and lower sections of the freeway. The elevator to the lower freeway is located north of the interchange, while the second is located in the middle of the interchange, guarded by several Gunners. The uppermost section contains very few Gunners, while the lower section has several and an Assaultron, as well as a Gunner commander with power armor (T-45/T-51 and very rarely T-60). It also consists of numerous shacks containing loot. Near the power armor station, there is a shack that contains several items and a crate containing rare loot.

The Mass Pike Interchange appears only in Fallout 4.

The Mass Pike Interchange (a.k.a. "turnpike") is a real location in Weston, Massachusetts.

Gunner encampment located inside one of the overpasses

Gunner encampment located inside one of the overpasses

The lift from Forest Grove marsh

View from the elevator

The turret at the gate terminal is visible

Power armor and a service station near the commander's quarters

A weapons chest in the commander's house 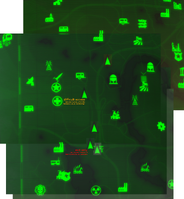