Mass Fusion was a pre-War energy provider and leader in the safe handling and disposal of nuclear waste.

Before the Great War, Mass Fusion was Boston's premiere utility, providing power to all of Massachusetts, providing a lucrative line of fusion wells, engines, and cores.[Non-canon 1][1] It was founded in 2043 by Karl Oslow, after spending six years cutting his teeth as an electrical engineer with Poseidon Energy. Oslow decided he'd had enough with traditional methods of energy distribution and founded Mass Fusion to begin realizing his vision: Power to the people.[2] His Cleanpower Initiative focused on developing affordable sources of energy based on nuclear principles, and by 2053 his efforts bore fruit, as the first "fusion" distribution boxes and sources of power entered the market. Through cunning and dedication, Oslow's company eventually cornered the energy market in Massachusetts, becoming the primary power provider for the state by 2070.[3]

In truth, the company was lying through its teeth about selling clean fusion power. The junction boxes and plutonium wells were all fundamentally fission-based, provided with lead shielding to protect the users from irradiation. However, imperfect shielding was all too common and radiation poisoning was a real risk among consumers. The company, of course, vehemently denied these accusations. Nausea, vomiting, hair loss and radiation burns were common symptoms, but they denied it had anything to do with their Cleanpower.[4] It wasn't until 2066 and the unveiling of the first power armor fusion cell[Non-canon 2] that the company truly started providing fusion power, but even then, legacy infrastructure was too commonplace to be cheaply replaced. Mass Fusion continued to operate containment facilities[Non-canon 3] and dumping grounds in rural Massachusetts, hiding the radioactive waste from prying eyes.[Non-canon 4]

However, Mass Fusion and its CEO were on the verge of making a breakthrough: The Cleanpower Initiative would finally create the first sustainable, clean fusion reactor. Through the use of a beryllium agitator, this reactor would be able to provide over 22,000 megawatts to Massachusetts and allow the company to finally stop lying. The brainchild of Karl Oslow and Noel Chandrich, the project was accelerated following Oslow's contacts with the military and the request for a power source beyond anything made before. Chandrich's protest went unheard and the project was accelerated. Thanks to Kathy Hathaway's work on graphene shielding, the installation of the agitator was made possible and the switch was finally thrown on July 30, 2077. By August 29, the reaction was confirmed as stable. Chandrich was fired a week later, with a non-compete agreement to boot.[5]

Perhaps for this reason, Poseidon Energy was attempting to buy out Mass Fusion shortly before the War cut their operations short.[6]

Mass Fusion appears in Fallout 4. Advertisements for the company appear in Fallout 76. 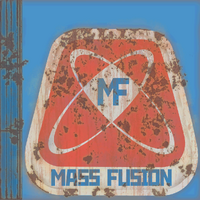 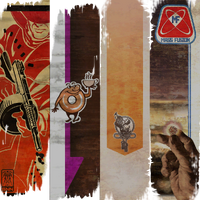 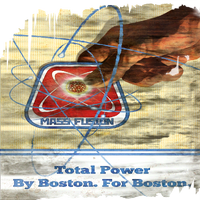 Mass Fusion ad from The Art of Fallout 4