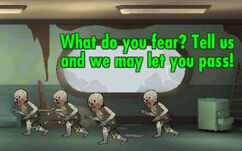 “In order to scare the Raiders away from Vault 31, a helpful traveler suggested getting Ghost Costumes from an old factory nearby.”

Mask Hysteria is an overseer quest and part of the Mystery of Vault 31 multi-stage questline in Fallout Shelter.

In the building, which has a random layout, there are several groups of feral ghouls you must fight, in groups of two to four. You may also encounter an irradiated ghoul among them. The ghouls you are looking for are found near the top of the level. The first and third dialogue options avoid the fight, while the second and fourth options end in combat. You retrieve the ghost costumes here.

Rewards
Add a photo to this gallery

Retrieved from "https://fallout.fandom.com/wiki/Mask_Hysteria?oldid=3268488"
Community content is available under CC-BY-SA unless otherwise noted.