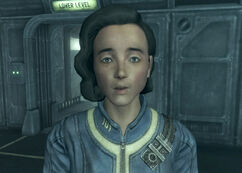 “We should just go back to our quarters.”

During the confusion of the Lone Wanderer's extrication from Vault 101, Mary and Tom Holden attempt to flee the violent security officers O'Brian and Richards, and are usually gunned or beaten down in cold blood unless one steps in to save them.[1]

The Holdens will flee if the Lone Wanderer gets shot at before Tom attempts his escape. One may wish to utilize this to save the Holdens. Since the guards will rarely leave their post and chase the player character, the vault can be broken free from with minimal bloodshed.

Escape!: Mary and her husband, Tom, can be heard talking about escaping the vault in the main atrium. Following their brief chat, she and her husband run, trying to escape, but to no avail.

Waiting to watch Tom get shot will also cause Mary to run towards the guards shortly after, getting killed as well.

Mary Holden appears only in Fallout 3.

Tom and Mary talking before trying to escape

Mary getting shot down
Add an image to this gallery

Retrieved from "https://fallout.fandom.com/wiki/Mary_Holden?oldid=3219814"
Community content is available under CC-BY-SA unless otherwise noted.