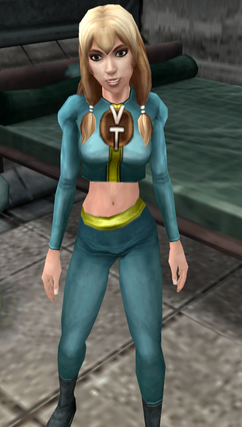 “I've lived my whole life in the Vault. It used to be pretty cool living down here... until the fight. Now we're stuck in this crappy Garden. BORING.”— Mary

Mary is a teenage girl living in the Secret Vault.

She helps the Initiate after their first fight with the general of the super mutants who attacked the vault, Attis, where the Initiate gets their arm cut off by Attis, who then pushes them into a hole leading to the ruins. Here, Mary found the Initiate seriously injured and guides them to the garden.

She often searches the deathclaw infested ruins section, looking for her mother's lost ring. The Initiate could help her find it. Later, she escapes the Secret Vault when the auxiliary vent is off, allowing the people to enter the wastes.

Mary appears only in Fallout: Brotherhood of Steel. 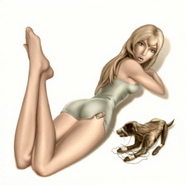 Bonus image, unlocked after completing the game
Add an image to this gallery
Retrieved from "https://fallout.fandom.com/wiki/Mary_(Fallout:_Brotherhood_of_Steel)?oldid=2707672"
Community content is available under CC-BY-SA unless otherwise noted.