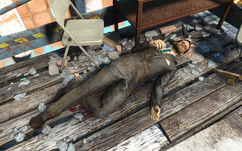 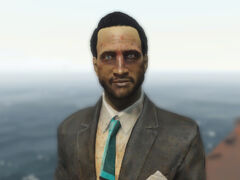 Marty Bullfinch was an adventurer whose corpse can be found on the roof of Faneuil Hall in 2287.

Marty was detective Nick Valentine's partner before quitting due to he and Nick "not seeing eye to eye, usually because he was on the barroom floor." His holotape describes him planning a job, involving the gilded grasshopper on the roof of Faneuil Hall. In the holotape, he invited Nick Valentine to join him for the treasure hunting, but for reasons unknown Nick didn't join him and he eventually ventured alone. His body can be found on the roof, close to the gilded grasshopper. Based on the observation of Nick Valentine, Marty presumably braved through Faneuil Hall all alone "like a champ," and died of fatal wounds on the roof.

Marty Bullfinch appears only in Fallout 4.

Retrieved from "https://fallout.fandom.com/wiki/Marty_Bullfinch?oldid=3289571"
Community content is available under CC-BY-SA unless otherwise noted.