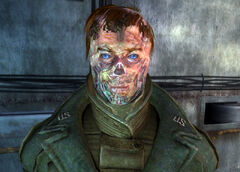 General Martin Retslaf was the commander of the Hopeville missile base before the Great War.

A four-star general in the United States Army[1] assigned to the Commonwealth Defense Administration's Ballistic Defense Division, Martin Retslaf was in charge of the nuclear missile silo located in Hopeville Missile Base.

When the Great War came, Hopeville Missile Base, and most of the other silos located in what would become the Divide, didn't launch their missiles. The general survived the war, and remained within the Hopeville silo.

He eventually became a ghoul, and his body can be found, still seated at his desk, in a second-floor office of the Hopeville missile silo bunker. No record of the general's death can be found in his office or elsewhere in the Divide. However, surrounding General Retslaf's desk are several empty whiskey bottles and an N99 10mm pistol on the desk with eleven 10mm rounds in his inventory (the N99 has a twelve round magazine).