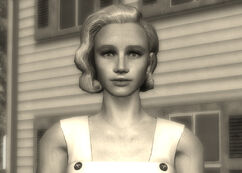 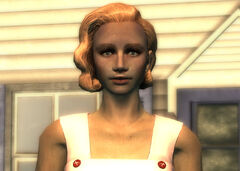 “Sorry, kiddo, but I'm not in the mood for jokes.”

Martha Simpson is one of the inhabitants of Vault 112 and part of the Tranquility Lane virtual reality simulation, still alive in 2277.

She swears, if looks could kill, Janet Rockwell would have put her in a hospital by now. Thankfully, Janet's husband is always there to smooth everything over, but Martha is worried about her friend Janet. Perhaps she should speak to Mabel Henderson about it.[1]

Like the other inhabitants of Vault 112, she is trapped in the Tranquility Lane simulation by Stanislaus Braun.

Her relationship with Roger Rockwell is talked about by many of the residents of Tranquility Lane, but most interestingly, her. If one reads Janet Rockwell's diary and passes a speech check, she will vent to you about how Roger pushed her away (because of Janet fighting with him) and she knew there was chemistry. She says she tries to stay away from Roger now so Janet won't hate her even more.

Martha seems to be saddened that Roger denied the fact they had something.

Tranquility Lane: Martha Simpson has no special role. She is one of the residents one may have to kill if they choose to do all of Betty's tasks.

Martha Simpson appears only in Fallout 3.

Retrieved from "https://fallout.fandom.com/wiki/Martha_Simpson?oldid=3125342"
Community content is available under CC-BY-SA unless otherwise noted.