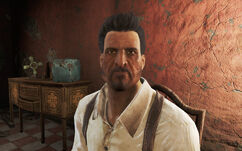 “Look, I know it's an open door, but it's like a... philosophically open door, okay? Get the hell out.”

Marowski is a major chem supplier in the local area, living in Goodneighbor in the Commonwealth in 2287. He can be found inside the Hotel Rexford, accompanied by his bodyguard, Stan Slavin.

Marowski was once a renowned drug kingpin and party maniac until around 2280 when he decided to settle down and conduct his drug-running operations from the Hotel Rexford in Goodneighbor. He remains a primary supplier of chems in the region and has a wide network of connections. The dealer maintains a hidden chem lab southeast of Goodneighbor, in the Four Leaf fishpacking plant, protected by a complex security system.

Even though his current influence is a fraction of what it is used to be, Marowski has a number of loyal associates working for him, most of whom are also responsible for looking after the Hotel Rexford. He has his bodyguard, Stan Slavin, Fred Allen, who peddles his chems out of the hotel, and Clair Hutchins, who manages the hotel. He also has a contact in Diamond City, the bartender Henry Cooke, who cooperates with him on a deal to smuggle chems into the city to circumvent Mayor McDonough's taxes through Cooke's representative Nelson Latimer. Latimer regularly meets up with Trish, another of Marowski's associates, to conduct chem deals for her boss.

Marowski appears only in Fallout 4.

Retrieved from "https://fallout.fandom.com/wiki/Marowski?oldid=3289569"
Community content is available under CC-BY-SA unless otherwise noted.