Marowski's chem lab is an unmarked location in the South Boston neighborhood of Boston in 2287. It is accessible by a catwalk on the roof of the Four Leaf fishpacking plant leading to a hidden security door opened via a Master-locked terminal, or by tripping the lasers outside the plant as per Trish's note.

The main area of the chem lab contains three rooms: an entry room with a broken terminal, a main lab area directly ahead, and a small room to the left with mattresses. One enemy is posted behind the terminal, while the other three are in the main lab area. All enemies are immediately hostile. The entry room and the main lab area contain a total of four chemistry stations. Various containers contain a handful of chems.

The main lab room contains a locked door unlocked by a nearby control terminal which does not require a password. The door leads to the fishpacking plant, but may only be accessed from this side.

Four hazmat suits can be taken from the chem lab workers when killed.

During the quest Diamond City Blues, Trish states that this place has more loot than what she has in her shipments; however, it appears to actually have significantly less. 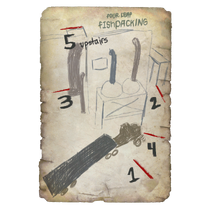 Note dropped by Trish describing the security system to reveal the door
Русский
Community content is available under CC-BY-SA unless otherwise noted.
Advertisement