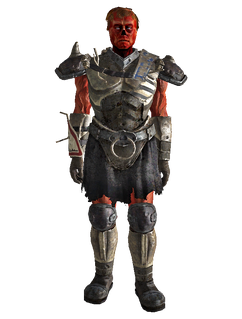 The marked tribal armor is a piece of armor in the Fallout: New Vegas add-on Lonesome Road.

A crudely crafted metal armor by some former Caesar's legionaries who became marked men in the Divide pre-2281. Marked tribal armors are crude versions of Legate Lanius' armor, constructed from Divide metal, not with care and strength, but with hate, keeping the marked men that were formerly with Caesar's Legion anchored. The armor itself is blackened, broken in places and reinforced by signs from the Divide.