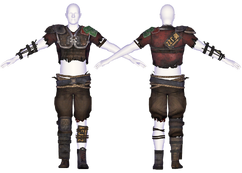 The marked scout armor is a piece of armor in the Fallout: New Vegas add-on Lonesome Road.

The armor is similar to the Legion explorer armor or Legion prime armor but is missing the armor segment that goes over the stomach, and has a length of rope around the waist with a brace or wire segment on the arm, as well as torn pants instead of a toga.

The armor has been reinforced with the following signs: St. Taxco, Ruby Drive, Sunset Ave., and a California license plate reading "RF J22" with the year "63" in the corner.

License plate on the back of the armor

Noclip view showing full names
Add a photo to this gallery
Retrieved from "https://fallout.fandom.com/wiki/Marked_scout_armor?oldid=3459562"
Community content is available under CC-BY-SA unless otherwise noted.