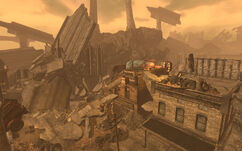 The marked men camp is a location in the Divide in 2281.

The camp consists of a collapsed highway at the north end with five destroyed houses and some improvised camps. In one of the houses, the marked men have set up on the roof. One of them wields a Red Glare, and next to him is a second Red Glare and the laser detonator. Below the house is a living space that holds a bed, a first aid box, and some explosive crates. Two houses down there is another house with two ammunition boxes inside a cooler, along with various ammunition. There is a RALPHIE poster for the Feel Like a Kid Again challenge on the side of the farthest southeast building.

The south portion of the area has radiation and a warhead can be found on a truck at the south end. Once the camp is entered, the player character is trapped in the camp area until they use the laser detonator to detonate the warhead.

Location of the Red Glare and laser detonator

Bowie knife
Add a photo to this gallery
Retrieved from "https://fallout.fandom.com/wiki/Marked_men_camp?oldid=3465145"
Community content is available under CC-BY-SA unless otherwise noted.