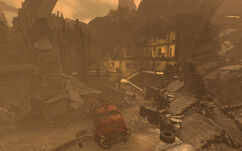 The marked men base is a location in the Divide.

The area is comprised of a destroyed building with tons of debris and rubble around it. In front of the building there is a destroyed firetruck used as a watch for the marked men to watch for victims.

The marked men base appears only in the Fallout: New Vegas add-on Lonesome Road.

Retrieved from "https://fallout.fandom.com/wiki/Marked_men_base?oldid=2265120"
Community content is available under CC-BY-SA unless otherwise noted.