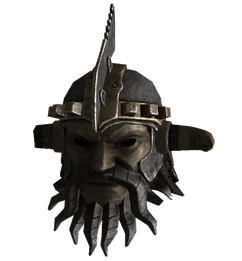 The marked beast tribal helmet is a piece of headwear in the Fallout: New Vegas add-on, Lonesome Road.

It provides a Damage Threshold of 4 as well as a bonus of +3 to Melee Weapons and Unarmed skills.

A crude helmet crafted by former legionaries inside the Divide before becoming marked men. The helmet, like its variants, were created as mirrors of their new and unknown Legate, a symbol they could hold on to, while the Divide tears them apart.

This version is the one that resembles Lanius' helmet the most, though it's still missing the horn on the right side and the red frill on top.

Can be found on Bonesaw, southeast of the Ashton silo control station near a small building.

Retrieved from "https://fallout.fandom.com/wiki/Marked_beast_tribal_helmet?oldid=3014603"
Community content is available under CC-BY-SA unless otherwise noted.