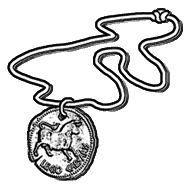 “The eyes of the mighty Caesar are upon you. He admires your accomplishments and bestows upon you the exceptional gift of his Mark.”— Alerio

The Mark of Caesar is a quest item in Fallout: New Vegas.

It is a necklace given to the player character by Vulpes Inculta (or Alerio if Vulpes was killed) upon exiting The Tops casino after completing Ring-a-Ding-Ding! as part of the quest Render Unto Caesar. The Mark allows safe passage to Caesar's camp, even if the player has a low reputation with Caesar's Legion.

Retrieved from "https://fallout.fandom.com/wiki/Mark_of_Caesar?oldid=3167313"
Community content is available under CC-BY-SA unless otherwise noted.