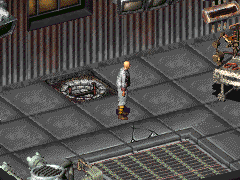 “You're a RESEARCHER...? Hmmmm. I've never seen you before. How much do you know about pharmaceutical research?
Uh, enough. Just sit back and watch me go.”— Marjorie and the Chosen One

Marjorie Reed is the lead researcher at the Stables in 2241 (the Mordino family drug lab north of New Reno).

Marjorie is a tired-looking woman. Her head has been shaved bald, and she wears a white coat.[1] As one of the primary researchers at the Stables, Reed was tasked by the Mordinos' drug designer, Myron, with testing and refining new varieties of jet, a methamphetamine hybrid inhalant drug, used by many, marketed by the Mordino family. Even under the best conditions drug testing is dangerous and always harbors the risk of heavy addictions of some kind. Between the Mordino family's pressure for increasing the Jet's saturation of the local communities, its potency for addiction, and Reed's own distinct lack of ethics, drug testing at the Stables is a torturous, deadly affair for her and the slaves she tests it on.

Reed's test subjects are slaves purchased from the ever-present Slaver's Guild. The physical and mental attrition rate is extreme; when Jet was first being produced, testing killed nearly one hundred slaves most likely due to the extreme amount of methane being inhaled. Reed continues the deadly tests, albeit on a smaller population.

Not content to merely observe effects of drugs, Reed's team of researchers uses several investigatory methods that are both unethical and amoral. Dissection is common, as is vivisection of patients to observe internal effects the drug has while the patient is still alive. Subjects are given increasing dosages of untested drugs while they are observed. Through it all, Reed keeps making notes, observing with utter detachment as she and her fellow researchers cause all manner of horrific injury to their test subjects.

Her loyalty to the family is not above a bribe or a lie, however. It is possible to bluff one's way into the Stables, even into the secured tunnels below, by either bribing or complimenting Reed. Even a knowledge of drug production and testing is enough to get Reed to allow a visitor into the Stables.

Marjorie Reed's fate is largely left open; since visiting the Stables is not a requisite to completing the plot of the game, Reed may not be encountered at all. Even passing visitors to the Stables - or those given to letting weapons do all the talking - might never actually meet Reed at all. However, Reed is the easiest, most peaceful route to Myron.

Because of how critter art works in Fallout's engine, Majorie sounds like a male when she gets hurt.

Marjorie Reed appears only in Fallout 2.

A low Intelligence character will refer to Reed as Delenn, possibly a reference to the Babylon 5 character, as both share a similar hairstyle.

Retrieved from "https://fallout.fandom.com/wiki/Marjorie_Reed?oldid=3073157"
Community content is available under CC-BY-SA unless otherwise noted.