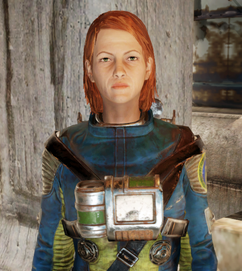 “"Money makes the world go 'round." The currency's changed, but the truth hasn't.”

Marion Copeland is the leader of a group of scavengers at the Emmett Mountain disposal site in Appalachia in 2103.

Born to a mining family she never saw herself taking on the trade.[1] Instead she took to the managerial aspect of industrialized trade.[2] Following the Great War, in 2103 Marion and her scavengers came to the region following the influx of people to the region following the rumors of gold. Although most people are scavengers at some level to survive she and her crew like to take on the jobs that require coordination and perseverance. Specifically choosing to co to the more dangerous places and pick them clean, to then sell the assets off to the highest bidder. To that end, she and her crew are decontaminating the Emmett Mountain disposal site to retrieve any useful materiel and untapped mineral resources.[3][4][5]

Although she and her crew were following the people entering the region she is an independent operation, only hearing of the caravan routes setting themselves up in the region. She also heard of, and thinks positively towards, the super mutant Grahm who took up trading.[2] Her and her crew are welcoming towards people who can pull their weight,[6] and she especially like it if they are well prepared for their tasks.[7]

She has experience with both Foundation, and the Crater raiders. In her opinion, the former are good folks but poor negotiators, and the latter as not as bad as you would think.[8]

Marion Copeland appears only in Fallout 76, introduced in the Wastelanders update.

Retrieved from "https://fallout.fandom.com/wiki/Marion_Copeland?oldid=3417823"
Community content is available under CC-BY-SA unless otherwise noted.