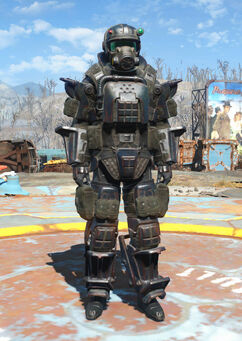 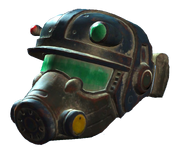 An advanced model of combat armor utilized by U.S. Marines stationed at the Mount Desert Island Naval Facility before the Great War.[1] Several suits of the armor, in various states of deterioration,[2] were already inside the base when the bombs dropped and were adopted by high-ranking members of the Church of the Children of Atom. More shipments of the armor were on their way to the base when the bombs fell.[3]

Marine armor is a top-tier armor, and its protective qualities are stated to be surpassed only by power armor and heavy Nuka World raider faction armor. Its Damage Resistance and Energy Resistance are far superior to what a full set of upgraded heavy combat armor can provide, topped off with a decent amount of Radiation Resistance, to boot.

The downside is the armor's extremely high weight - at 95 pounds for the full set, it weighs more than T-60 power armor without a frame to bear the load.

Aesthetically, Marine armor appears like a cross between an early-stage power armor prototype and an Explosive Ordnance Disposal (EOD) suit, with thickly reinforced plating covering every part of the body. The torso piece incorporates a power pack mounted to its back as well as a thick pipe on the chest that might hint at some sort of air filtration or cooling system. Both are purely cosmetic and do not add any functionality to the armor in-game. The same is true for the armor's multiple pockets.

Contrary to all other armor sets, Marine armor versions are craftable modifications instead of fixed tiers and therefore quite similar to power armor upgrades. A set of Zealot armor can be upgraded to Assault armor or Inquisitor armor at any armor workbench, provided that the player meets the required Armorer and Science! perk levels. Regardless of perk level, both the Assault helmet and the Tactical helmet cannot be modified in any way.

Zealot and Inquisitor variant of the Marine armor

Assault variant of the Marine armor