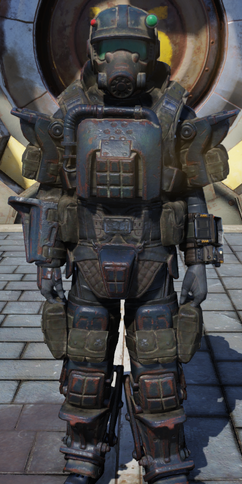 Marine armor is a set of armor in Fallout 76.

The armor is highly advanced combat armor developed by the US military for use by the Marine Corps. The armor consists of large and bulky pieces and pouches on the arms, legs, and abdomen of the suit. The suit is essentially a mix of combat armor and power armor, appearing and functioning as such in design and defense.

Retrieved from "https://fallout.fandom.com/wiki/Marine_armor_(Fallout_76)?oldid=3445150"
Community content is available under CC-BY-SA unless otherwise noted.