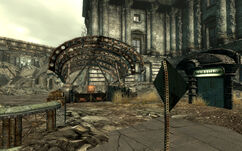 Marigold station is one of the metro tunnel stations on the Blue Line in Fallout 3 and is located in Grayditch. It is the easiest route to take to Falls Church, but unfortunately, it is also filled with dangerous fire ants.

Within the station, continuing on the path, there is a room that leads downwards through two sections with several fire ants, along with various loot, until the path ends in the Blue Line tunnel, which will show two paths, one to the left will lead to the Eastbound Falls Church, or to the right which is westbound of Marigold station. Following the left path down to Falls Church, there will be an encounter with yet another fork, the straight path leading to Falls Church, and the right arch leading towards another room to the left where the naughty nightwear is located.

When taking the right instead of the left pathway, will lead to the upper deck of the train station, where there will be an encounter with a few more fire ants, and a booth which inside is the location of Grady and his holotape about the secret package. To the right is two stairs which lead downwards to the lower deck, where the area is nothing but rubble except for two tunnel entryways, one to the left is the Blue Lines tunnel which leads towards Falls Church, and the other leads down to a destroyed tunnel. To the right of the destroyed tunnel leads through a small passageway of two rooms, the first room holds a small closet which ends with Grady's firehose box. Proceeding through, there will be an encounter with more fire ants. At the end of the passageway, it will lead back out into the tunnel, where on the slight left, is a room which opens to be where Doctor Lesko resides; a small laboratory and a terminal of his notes. Leaving his lab throughout the next door leads out into the Blue Lines tunnel where to the right leads through the queen ant's hatchery.

Doctor Lesko has set up his lab (E) just north of the entrance to the queen ant's hatchery. One can also find William Brandice's corpse down here. (D)

One can find the corpse of a man named Grady on the large platform with the escalators leading up to it. The holotape (A) contains information about the whereabouts of a safe (C) and the key to open this safe, it also adds the map marker for Girdershade.

The key is hidden in a firehose box on the far side of the wall in a storage room inside the station. (B)

The Marigold station appears only in Fallout 3.

Retrieved from "https://fallout.fandom.com/wiki/Marigold_station?oldid=3267358"
Community content is available under CC-BY-SA unless otherwise noted.