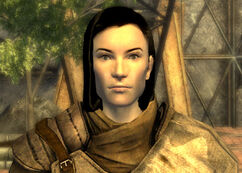 Head of the NCR military police
4 of Hearts

“How the hell did a brahmin get loose on the Strip? If this is another one of Private Erwin's pranks, I'll make him regret it.”

Captain Marie Pappas is the head officer of the NCR military police serving at the NCR Embassy in 2281.

She is found at the NCR Embassy on the New Vegas Strip. She can be found either in a bunk or walking around the embassy. She is unfriendly and cold towards the Courier when she first sees them and speaks in a rude manner, but they can ask her about Jake Erwin, the Strip or herself. Her responses are curt. She is also the only NCR officer that carries a gun on the Strip.[1] Private Jake Erwin refers her as a "hard-ass" but also harbors respect for her, saying she is the best captain he has had.

How Little We Know: The player character can report a murder at the Gomorrah casino, and show her Clanden's snuff tapes as evidence of the crime. However, there's no way to pursue this line of investigation any further, as the player character is unable to identify Clanden as the man on the tapes.

Retrieved from "https://fallout.fandom.com/wiki/Marie_Pappas?oldid=3288747"
Community content is available under CC-BY-SA unless otherwise noted.