xx000F39
“See, little Marie isn't just special to Ashur and I. She's the cure for The Pitt's mutations, so she's special to all of us.”— Marie's mother, Sandra

Marie is the daughter of Ashur and Sandra, living in Haven in 2277.

Marie was born with a natural resistance to radiation and Troglodyte Degeneration Contagion, and because of this unique gift, she has been studied by her parents to find a cure to help with the constant radiation in the Pitt. Teddy bears are her favorite toy.[Non-canon 1]

Marie appears only in the Fallout 3 add-on The Pitt. 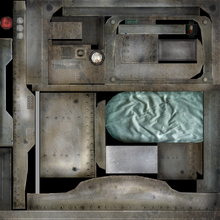