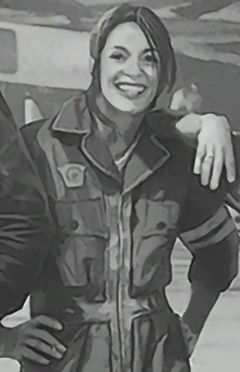 Maria on the Responders photograph

Maria Chavez was the leader of the Responders, a faction that existed in post-War Appalachia and was comprised of former military, police, medical personnel and firefighters.

Maria Chavez was one of the founders of the Responders after the Great War,[1] eventually becoming their official leader. Her mother was a nurse who worked at AVR Medical Center and her interest in naturopathic medicine helped Maria in the aftermath of the War with treating people as the availability of medical supplies dwindled.[2]

While trying to secure more resources for the Responders, Maria wrote to Jeff Nakamura with the idea of sending a team to scavenge Gauley mine.[3]

She died in November, 2096, when a large horde of Scorched attacked the Responders' command post at the Morgantown Airport terminal. Her remains cannot be found there.

Maria Chavez appears only in Fallout 76.

Letter found on a dead Responder

Maria posing with fellow Responders
Add an image to this gallery

Retrieved from "https://fallout.fandom.com/wiki/Maria_Chavez?oldid=3250173"
Community content is available under CC-BY-SA unless otherwise noted.