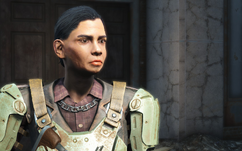 Maria is the leader of an independent mercenary group living in the Commonwealth in 2287.

Maria is the commander of an independent mercenary group, employed by Jack Cabot. She and her team were hired by the Cabot family to protect Lorenzo Cabot from being freed from his cell in the Parsons State Insane Asylum, in order to prevent his otherworldly powers from being exploited by any outside groups or individuals.

When returning with Jack Cabot for the final stage of The Secret of Cabot House quest, she will be among the dead mercenaries around the entrance. Cabot notes as he arrives that the mercenaries put up a good fight, but ultimately failed to prevent the raiders entering the asylum.

Maria appears only in Fallout 4.

Retrieved from "https://fallout.fandom.com/wiki/Maria_(Fallout_4)?oldid=3299880"
Community content is available under CC-BY-SA unless otherwise noted.