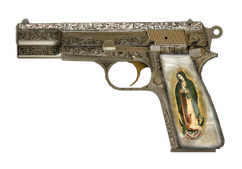 “From where you're kneeling it must seem like an 18-carat run of bad luck.”— Benny just before he fires Maria at the Courier

Maria is a unique weapon in Fallout: New Vegas and the graphic novel All Roads.

This section is transcluded from 9mm pistol. To change it, please edit the transcluded page.

The M&A 9mm pistol is a semi-automatic handgun, designed by M&A Guns Manufacturers. It is the standard issue sidearm of the New California Republic Army and a common sight in the Mojave Wasteland.

A custom model of an M&A 9mm pistol made by M&A Guns Manufacturers, this weapon has an image of Our Lady of Guadalupe, a well known Catholic figure and a representation of the biblical Woman of the Apocalypse, painted on the pearl grips of the firearm. The entire body of the pistol is damascened with ivy and floral details, with a polished nickel finish and a golden trigger. It, along with Chance's knife, was responsible for a great number of Fiend deaths in the graphic novel All Roads. It is also the gun used by Benny to shoot the Courier in the Fallout: New Vegas introduction cinematic, and as such is owned by him.

Maria is a unique variant of the 9mm pistol, that has a higher rate of fire, more damage per shot, is more accurate, and has higher durability than the standard variant. Like most unique weapons, weapon modifications cannot be used on Maria. Like the standard 9mm pistol, Maria is also a concealable holdout weapon, so long as one's Sneak skill is 50 or greater.

Maria can fire a total of about 995 rounds, the equivalent of 77 reloads, from full condition before breaking.

As with the 9mm pistol, Maria is based on the real-world Browning Hi-Power pistol.[1]

Close up of Maria's artwork

Official screen of Maria in use.

"The game was rigged from the start."

The manufacturers on the border of the classic and unique variant 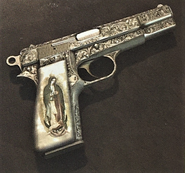 Retrieved from "https://fallout.fandom.com/wiki/Maria_(Fallout:_New_Vegas)?oldid=3430775"
Community content is available under CC-BY-SA unless otherwise noted.