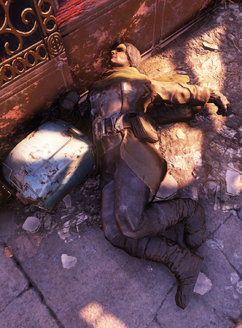 Palace of the Winding Path

Margie McClintock is a deceased character in Fallout 76.

Margie was the leader of the Diehards, one of the gangs that made up Appalachia's raiders. She was much unlike other raiders, taking measures to protect the residents of the Palace of the Winding Path from other gangs and only killing innocents when there was no other option.[citation needed] Many other survivors refused to hand over goods, however, forcing the gang to constantly have to kill innocents for supplies. This eventually led Margie into a depressive state, deciding to take her own life through a chem overdose and hoping another gang member, Vincent Fried, would be a more successful leader.[citation needed]

Her corpse can be found on the top floor of the Palace of the Winding Path, along with a goodbye note next to her.

Margie McClintock appears only in Fallout 76.

Retrieved from "https://fallout.fandom.com/wiki/Margie_McClintock?oldid=3177054"
Community content is available under CC-BY-SA unless otherwise noted.