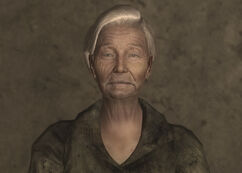 “But it's his building, so everyday I make that damned "Iguana Bits sandwich, no salt, with a peeled pear on the side. Send it up to the penthouse."”

Margaret owns and operates the Café Beau Monde. Because the cafe only serves the residents of Tenpenny Tower, her clientele is limited, allowing Margaret to prepare and serve all the meals. The restaurant is open from 6:00 AM to 9:00 PM, and Margaret is the service provider the entire time. When the restaurant closes, she generally spends her time in her room.[1]

Margaret says she picked up cooking from her late mother. She explains that her mother wasn't always the best, though she showed her love for her family through cooking.[2]

Since Allistair Tenpenny refuses to come down from his suite, Margaret has to prepare all his meals and take them up to him herself.

Margaret Primrose appears only in Fallout 3.

Retrieved from "https://fallout.fandom.com/wiki/Margaret_Primrose?oldid=3244650"
Community content is available under CC-BY-SA unless otherwise noted.