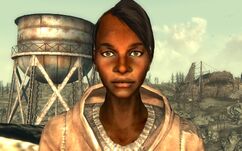 Margaret as she appears in the Prima Guide

“If Three Dog were here, he'd say something witty. But he's not. 'Cause somebody killed him. So you get me playing music. Yay.”

Margaret is a technician and engineer who works with Three Dog at the GNR building plaza.

Margaret is an engineer and technician who works with Three Dog to keep Galaxy News Radio on the air. If Three-Dog dies, Margaret will take his place on the radio as the acting DJ.

She is significantly different from Three Dog, as her personality is generally unenthusiastic, unexciting, and blasé. She does not physically appear anywhere in the game, as she is only heard on the radio.

Margaret is heard only in Fallout 3.

Retrieved from "https://fallout.fandom.com/wiki/Margaret_(Fallout_3)?oldid=3146344"
Community content is available under CC-BY-SA unless otherwise noted.