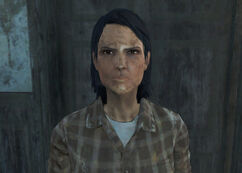 Marcy Long is a settler traveling with Preston Garvey and his group in the Commonwealth in 2287. Marcy is first met taking refuge in the Museum of Freedom, Concord, in the company of the aforementioned minuteman and what is left of his crew.

A refugee from Quincy following Preston Garvey's lead, Marcy has steadily seen everything in her life go to pieces. Originally a settler in Quincy, Marcy was happily married to Jun Long, with a single child, Kyle, and a prospering store. Both were skeptical of Mama Murphy's sudden visions of Quincy's destruction, cutting her off, but not before Mayor Jackson requested Minutemen assistance.[1]

Although Jun considered the Minutemen freeloaders, he did a 180 when Colonel Ezra Hollis arrived, routing a Gunner detachment trying to take Quincy by surprise. Marcy, on the other hand, was concerned that despite the rout, there were too few minutemen to defend the town against a larger, more coordinated attack. Hollis' assurances did not ease her mind.[2]

When Gunners attacked Quincy again, blowing up the highway and attacking with the height advantage, she was proven right. Only a small group managed to get away under Preston's lead, including Marcy, her husband, son and shirts on their backs. The desperate flight across the Commonwealth took its toll: Gunners chased them away from Quincy, feral ghouls from Lexington and eventually raiders cornered the few remaining survivors at Concord.[3]

Having lost everything, including her only son, Marcy is overcome with bitter grief. It manifests primarily as anger: A mixture of various emotions, including furious, unrelenting hatred towards raiders, paranoia and excessive caution (in fact, she is reluctant to settle in any permanent area, due to fear of it being overrun again), and irritation. It takes a great deal to improve her spirits, but even then, the string of bad fortune and losing her only child has left her permanently scarred.

Marcy Long appears only in Fallout 4.

Marcy's essential status was not removed upon completing Sanctuary at release. This was fixed in patch 1.7.

Retrieved from "https://fallout.fandom.com/wiki/Marcy_Long?oldid=3290177"
Community content is available under CC-BY-SA unless otherwise noted.