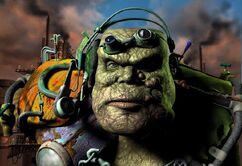 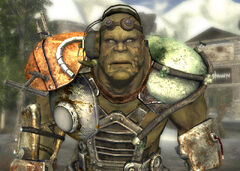 “Right. Well, never really HATED humans. We just had a better way. These new governments, they think they've got all the answers. Blah, blah. Been there, seen that, got the scars.”

Marcus is the elderly super mutant sheriff of Broken Hills in 2241 and mayor of Jacobstown in 2281. A survivor of the Master's army, his once fervent dedication to the Master's cause has since softened into a more tolerant attitude.

A burly old mutant with a weary cast to his face, Marcus' toughness and vigor[1] seem at odds with his long history and fundamental belief in the goodness of people. He doesn't have any regrets about his transformation into a mutant. In fact, he prefers his existence as a super mutant, as he is free of the petty character flaws regular humans suffer from.[2]

He served in Unity with distinction, a firm believer in his vision and philosophy. For Marcus, the Master's plan was a chance for elevation of humans above internecine conflict and war, to break out of the vicious cycle of war, which never changes. Marcus believed that humans could never elevate themselves alone, that the Master's actions were a necessary step in the advancement of humanity.[3] The destruction of the Unity by the Vault Dweller hit him dearly. Though he hated the Vault Dweller at first, he eventually developed a healthy respect for him. After all, if all humans fought for their beliefs like he did, the Master would not have had to come into being. Still, he missed his friends, the best that humanity had to offer.[4][5]

After the fall of the Unity

Following the fall of the Master, Marcus took to the wastes. Around 2185, he came across Jacob, a Brotherhood Knight. The two fought for a couple of days, before realizing the futility of the fight. As the pair laughed, Jacob abandoned his sworn oath to destroy mutants and joined Marcus in his travels. As they traveled together, discussing Brotherhood doctrine and the Unity (in particular the neurolink between the Master and the Cathedral computers), people gradually started following them. After all, it doesn't get any safer than a Brotherhood Knight and a super mutant veteran. Marcus led the growing group to the site of a pre-War uranium mining town he knew about from old maps. There, he and Jacob founded the settlement of Broken Hills in fall of 2185.[6]

After ensuring that the town survived winter, Jacob said his goodbyes and moved on. Marcus stayed, as mayor and sheriff, though he missed his friend dearly. Particularly the arguments between him and Jacob on dipping and how the latter "would've been a great mutant"..[7][8] His steady hand in managing the affairs of the town led it to prosperity. Uranium found its way to numerous clients in the wastelands, including the Vault City.[9] Marcus' positive opinion of humanity, inspired by Jacob, eroded as he saw the petty hatred and jealousy tearing apart his people. He mused that the Master's plan could have succeeded with better candidates. But would it be able to succeed against the human tendency to tear down the exceptional men and women among them? In his heart, he knew that the Master was right. But he soldiered on.[10][3]

Rumors of an anti-mutant conspiracy did not help. Chasing shadows, Marcus eventually asked a tribal wanderer to help him investigate. That tribal was the Chosen One. After successfully exposing the conspiracy and saving Broken Hills' mine from closure, the old mutant decided he was far too old for settling down and joined the tribal.[11] They fought side by side on Control Station Enclave, saving the world from destruction, eventually vaporizing the oil rig in nuclear fire. Marcus never returned to Broken Hills. Instead, he headed east into the Rocky Mountains, inspired by his tribal friend. His goal: finding other mutants like himself and creating a place they could call home.[12][13] He never heard of the Chosen One again, but he had a feeling everything turned out well for his friend in the end.[12]

Marcus turned out to be a charismatic leader, gathering a sizable following of super mutants. Eventually, he and his followers reached Black Mountain, a pre-War satellite facility, irradiated by a direct nuclear strike. Scavengers avoided the place due to high amounts of radiation. However, this did not deter the super mutants, who claimed Black Mountain as their new home in 2277. The machines were in serviceable condition, enhancing its appeal.[14]

However, it did not turn out to be the safe haven Marcus imagined it as. The biggest and most long lasting problems came from the nightkin that accompanied him. Tabitha, a former high ranking member of the Unity and a nightkin suffering from a particularly severe case of Stealth Boy-induced schizophrenia, was a constant problem. After Rhonda, her robot companion broke down, her mental condition deteriorated. Attempts to distract her with a journal project failed when she discovered Black Mountain's radio station and managed to get it repaired.[15][16] Broadcasting her message consumed her attention and exacerbated her mental issues, leading her to ignore Marcus' leadership. After all, for her, he was a first generation super mutant, just a step up from the second generation imbeciles all too common in the settlement.[17]

Eventually, the situation deteriorated. As the nightkin clashed with Marcus' fellow first generation super mutants, he found himself unable to broker a peace. Rather than aggravate the conflict, he chose to leave along with those mutants loyal to him and found another community in 2279, but not before smashing Black Mountain's radio transmitter in an attempt to hamper Tabitha's efforts.[18] The radio did not remain broken for long, however. Raul Tejada, a wandering ghoul mechanic from Mexico, had been attracted by the broadcast's sudden disappearance and offered to fix it, but much to his dismay Tabitha decided to imprison him for his efforts and keep him around to be on hand to fix other broken things.[19] With her voice back on the airwaves, Tabitha was free to implement her utopian project. The State of Utobitha was born, broadcasting a rather peculiar, if not insane and rambling, radio message throughout the wasteland.[20][21] A permanent element of the program was the harassment of Raul, who was constantly threatened with execution, if he didn't fix anything and everything around the complex.[22][23] Having gained a firm foothold, the nightkin from Utobitha started harassing travelers and merchants on the I-15 for supplies and food. Although the victims reported the matter to NCR Rangers, they were unable to divert men and resources to take care of the problem.[24]

In the meantime, Marcus and his remaining followers traveled to the resort at Mount Charleston, where they founded another settlement. Marcus named it Jacobstown to honor his old friend. The place was perfect, far away from human settlements to remain peaceful and big enough to house the mutants and their crops. Marcus' ultimate goal was to establish it as a valuable trading partner and an example of human-mutant cooperation: A second Broken Hills.[25] Marcus has also founded a research project together with Doctor Henry of the Enclave, trying to find a cure for nightkin schizophrenia. His promise of cure attracted nightkin leaders such as Keene and Davison and their followers to the town, but as the research dragged on, the nightkin began to lose their patience.[26]

By the time the Courier came, Davison had left with his followers, while Keene's patience was teetering on brink. Something had to be done – quickly.[27][28]

He is skilled with big guns and large energy weapons. However, sometimes his use of burst weapons are as devastating to the team as to enemies. Also, like all other super mutants (barring those in Fallout Tactics), he is incapable of wearing armor which leaves him somewhat vulnerable. However, Marcus does have innate armor statistics that increase as he gains in abilities, thus mitigating his inability to equip armor. At his highest level, he has the equivalent of a suit of combat armor. The ammunition for his big guns can be a problem, too. This can be dealt with by arming him with a non-burst weapon like a turbo plasma rifle.

Marcus can be found randomly when taking a card from the loot deck. When the player character has him as the active companion and performs a test that uses Strength, Endurance, or Intelligence, he can be exhausted to gain one hit on the test.

"Well, what the hell. I haven’t seen one of those outfits for a long, long time. Takes me back."

"Yeah, I’m an ugly mutant. I also run this place. You got a problem with that?"
Add an image to this gallery

Marcus appears as a companion and a talking head in Fallout 2, and in Fallout: New Vegas as a non-player character. He is voiced by Michael Dorn in both. He is mentioned in Fallout Bible.

Marcus as he appears in Fallout: New California

Retrieved from "https://fallout.fandom.com/wiki/Marcus?oldid=3092190"
Community content is available under CC-BY-SA unless otherwise noted.