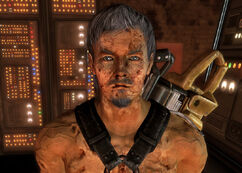 “Weapons. Lot's of 'em. There's something coming... and soon. So, I take the crap we find out in the yard and some of the tools we use, and I make them into stuff we can fight the bosses with.”

Nervous and slightly scatterbrained, Marco runs the equipment in the rotary press control room, which is constantly seizing up and breaking down. He is part of the uprising, knows Midea well, and keeps a repurposed steel saw for those who wish to challenge authority.[1]

Marco spends all of his time in a room filled with computers, without actually using his axe. The computers don't actually do anything, activating the safety stop mechanism prompts an "access denied" response.

Marco appears only in the Fallout 3 add-on The Pitt.

Sometimes when talking to Marco, he will tell the player character to "talk to Marco about getting a weapon" as if he himself is not Marco. [verified]

Retrieved from "https://fallout.fandom.com/wiki/Marco_(The_Pitt)?oldid=3348069"
Community content is available under CC-BY-SA unless otherwise noted.
... more about "Marco (The Pitt)"
RDF feed
Has platform
PC +  and Xbox 360 +