A Bit of Slap and Tickle 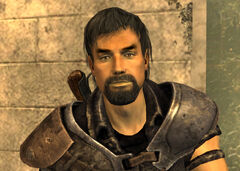 Marco without his baseball cap

“Mark my words - won't be long before the Legion and NCR butt heads over Hoover Dam.”

Marco is the landlord of Casa Madrid Apartments in New Vegas in 2281.

Marco is an entrepreneur who cares about little else than the rent of his tenants. He first set up the Casa Madrid Apartments to benefit from the steady influx of travelers too poor to afford entry to the Strip, but rich enough to stay around the greater Vegas area. After some time, he managed to form a lucrative relationship with Pretty Sarah, setting up his place as one of the best hotels outside the Strip, with complete sex services available to the discerning customer.