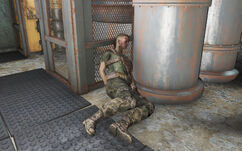 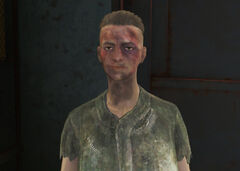 Sergeant Marcks is a dead Gunner in Nuka-World in 2287.

Sergeant Marcks is a deceased member of the Gunners, found in the gas-filled rooms of the Nuka-World access tunnels section of the Gauntlet. Prior to ending up at Nuka-World, she was ordered to scout the area around Fort Hagen for a potential Gunners takeover.

Marcks came upon Harvey during her patrols, hearing that his kidnapped "family" had been well supplied, she left him for dead and went to Nuka-World in violation of her orders. After her desertion Marcks eventually ended up in the Gauntlet, vowing that she would kill everyone involved were she to get out, especially the announcer RedEye.

According to her forehead tattoo, her blood type is O-positive.

Sergeant Marcks appears only in the Fallout 4 add-on Nuka-World.

Retrieved from "https://fallout.fandom.com/wiki/Marcks?oldid=3178949"
Community content is available under CC-BY-SA unless otherwise noted.