So Sultry
“I'm sure you wouldn't be too thrilled to talk to anyone if both your parents were dead and you were stuck with the people who caused it.”— Marcia when asked why she is so rude

Marcia Leone is a Brotherhood of Steel refugee in Appalachia.

Marcia, along with her mother and little brother Max, lived in a town that was being threatened with massacre by Raiders. When the Brotherhood of Steel came into town, Leila Rahmani decided to stay and fight the Raiders, while Daniel Shin decided to arm ordinary civilians for protection against the Raiders, which violated the Brotherhood's protocol to safeguard them instead of distribute them. The Raiders were able to steal their weapons and slaughtered everyone in the town, including Alan Connors, except for Marcia and Max. The orphaned siblings became refugees and traveled with the Brotherhood to Fort Atlas. Marcia's mother owned a necklace and Marcia regrets not being able to retrieve it from her body as a memento.

In 2104, after Ramirez tells Marcia that he would never let anything happen to Max, Marcia decides to leaves Fort Atlas. She tells Max she will always love him, which weirds him out because it is extremely unusual for Marcia to act like that. Although Marcia was sent to Foundation to get some supplies, several Brotherhood initiates returned saying they saw no sign of her there. She joins the Raider's War Party, becoming fast friends with Burke, Pierce and Sheena, considering them to be her new family. Meeting the Vault Dweller, Marcia decides to go look for Sheena and Burke at the AMS corporate headquarters after they disappear. They find clues such as Burke's dove necklace and they fight Kit, a member of the Hellcat Company at the top of the building. They eventually find Sheena and Burke held captive in the basement.

Marcia Leone appears only in Fallout 76, introduced in the Steel Dawn update and expanded upon in the Steel Reign update. 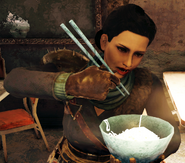