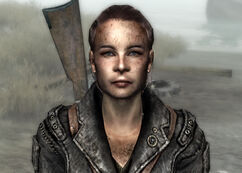 Abbey of the Road

“My God, I am sorry for all my sins with all my heart. In choosing to do wrong and failing to do good, I have sinned against You whom I should...”

S. Marcella J. is one of the inhabitants of Point Lookout in the year 2277.

Marcella is a nomadic missionary, spreading the word of her own faith. She came to Point Lookout from the Commonwealth aboard Tobar's ferry. Taking the tribal cultists and local inbreds for lost causes, she ministers to those she can. She was immediately suspicious of Obadiah upon meeting him and has made a mission of investigating Blackhall's connection to heathen creed of the Swampfolk.[1]

Her terminal mentions her travel east from the Abbey to the Commonwealth. From there, she took the Duchess Gambit south to Rivet City where she met up with Father Clifford before finally arriving at Point Lookout.

The Dark Heart of Blackhall: This quest is initiated when the Lone Wanderer encounters Marcella upon exiting Blackhall Manor. She asks the player character to find the Krivbeknih and take it to Dunwich in order to destroy it.

After finding the Krivbeknih, she will be found dead inside the tent (she was killed by a trio of smugglers for unknown reasons, although it is implied that Obadiah Blackhall hired them as mercenaries to kill her, as she was chasing after his book).

* 25% chance spawning
** On death if she is alive; other item if she is found dead

Marcella appears only in the Fallout 3 add-on Point Lookout.

Marcella killed
Add a photo to this gallery

Retrieved from "https://fallout.fandom.com/wiki/Marcella?oldid=3443257"
Community content is available under CC-BY-SA unless otherwise noted.