Mayor for a Day

On the Go
“I've never understood humans. They're always hurting each other. And they're really inefficient. If you're going to destroy the world, at least do it properly and eliminate our parasitic species for good.”

Maram Ayari is a robot enthusiast who lives in Watoga.

Maram is old enough to remember life before the Great War. A misanthrope, she never truly understood people and grew to believe that humans were inefficient and parasitic, mentioning that plenty of people were rude and judgemental to her. Before the Great War, she was fired after she told her boss that his code was terrible and needed to be reworked.[1]

In contrast, she became obsessed with robots, due to their straightforward, no-nonsense approach to their clearly defined purpose(s). She also thinks they are cute.[2] Her obsession has long since become a fetish, as she has a particular love for the imposing sentry bot.[3]

She eventually traveled to Watoga, snuck past the robots protecting MAIA and made the robots not view her as a threat. Now that the robots are running with her as an exception to their "kill everything" directive she resides at the Watoga Transit Hub and spends her time tinkering with robots. She enjoys role playing as a robot and uses the term "fleshlings" in reference to other people who encounter her. She is perfectly happy with living out her days in Watoga and never encountering human beings again.

Maram Ayari appears in Fallout 76, introduced in the Wastelanders update. 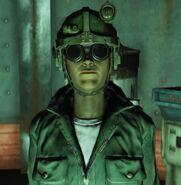 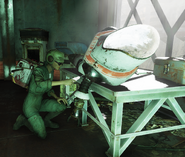