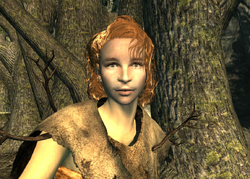 “And watch as He is prodded and picked apart by those who seek to exploit Him? I will never allow that! He must remain safe and we will be His guardians!”

Branchtender Maple is a character at Oasis in the year 2277.

Maple was born in 2252. She usually guards the gate to Oasis and only heads inside the gates to eat meals and sleep, and then returns to her post outside to stay alert and halt any incursions. Branchtender Linden is her guard relief. She is the newest addition to Oasis and is extremely loyal to Tree Father Birch.[1]

Branchtender Maple appears only in Fallout 3.

Maple is the common name for genus Acer, a type of tree. All of the human residents in Oasis have horticultural names.

Retrieved from "https://fallout.fandom.com/wiki/Maple?oldid=3408512"
Community content is available under CC-BY-SA unless otherwise noted.