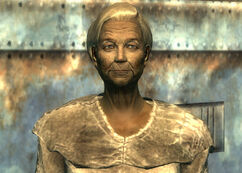 “When the war happened, the machines started dropping from the sky. Everyone around here thinks that the bomb made the crater, but it didn't.”

Manya Vargas is a resident of Megaton and the wife of Nathan Vargas in 2277.

Manya was born in 2213. At the age of 64, she is a sweet old lady. She and Nathan used to run a caravan line together and have managed to save enough caps and supplies to live out their retirement in Megaton. Manya's sweet exterior doesn't reveal that she's witnessed every misery that the wasteland has to offer. She is extremely wise and knowledgeable - two traits that allow her to continue to thrive and live in Megaton.[1]

Manya Vargas appears only in Fallout 3.

Retrieved from "https://fallout.fandom.com/wiki/Manya_Vargas?oldid=3131435"
Community content is available under CC-BY-SA unless otherwise noted.